Karen S. Price was involved in scientific research from 2009-2015 with Stanford University School of Medicine on Rolfing® Structural Integration for young children with Cerebral Palsy.
The results of the initial pilot project (2008-2010) have been summarized in this poster. The poster was first presented at the Pediatric Academic Societies Annual Meeting in Vancouver, British Columbia in May 2010. 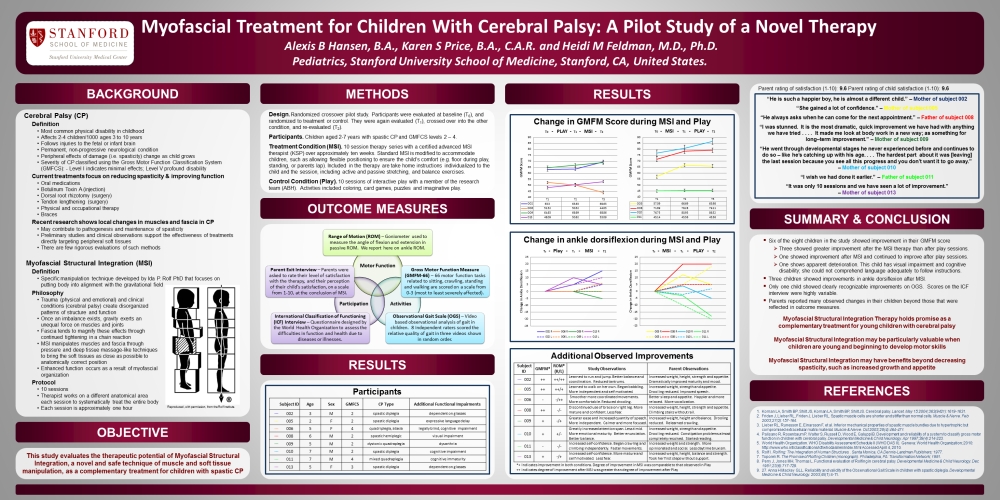 Myofascial Treatment for Children With Cerebral Palsy: A Pilot Study of a Novel Therapy

• Specific manipulation technique developed by Ida P. Rolf PhD that focuses on putting body into alignment with the gravitational field
Philosophy
• Trauma (physical and emotional) and clinical conditions (cerebral palsy) create disorganized patterns of structure and function
• Once an imbalance exists, gravity exerts an unequal force on muscles and joints
• Fascia tends to magnify these effects through continued tightening in a chain reaction
• MSI manipulates muscles and fascia through pressure and deep tissue massage-like techniques to bring the soft tissues as close as possible to anatomically correct position
• Enhanced function occurs as a result of myofascial organization Protocol
• 10 sessions
• Therapist works on a different anatomical area each session to systematically treat the entire body
• Each session is approximately one hour

This study evaluates the therapeutic potential of Myofascial Structural Integration, a novel and safe technique of muscle and soft tissue manipulation, as a complementary treatment for children with spastic CP

Reproduced, with permission, from the Rolf Institute.

Design. Randomized crossover pilot study. Participants were evaluated at baseline (T0), and randomized to treatment or control. They were again evaluated (T1), crossed over into the other condition, and re-evaluated (T2).

Treatment Condition (MSI). 10 session therapy series with a certified advanced MSI therapist (KSP) over approximately ten weeks. Standard MSI is modified to accommodate children, such as allowing flexible positioning to ensure the child’s comfort (e.g. floor during play, standing, or parents lap). Included in the therapy are take home instructions individualized to the child and the session, including active and passive stretching, and balance exercises. 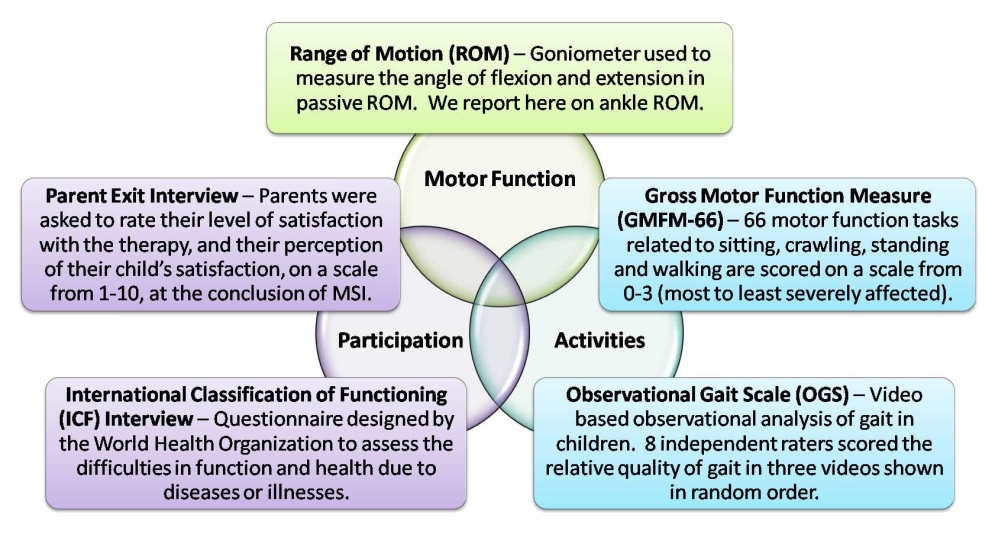 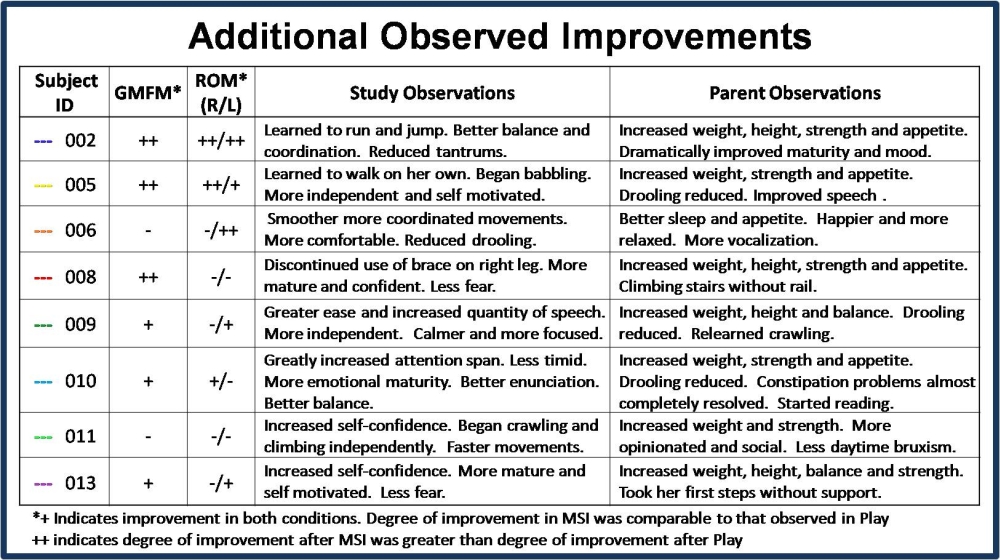 “He is such a happier boy, he is almost a different child.” — Mother of subject 002

“She gained a lot of confidence.” — Mother of subject 005

“He always asks when he can come for the next appointment.” — Father of subject 008

“I was stunned. It is the most dramatic, quick improvement we have had with anything we have tried… It made me look at body work in a new way; as something for long-term improvement.” — mother of subject 009

“He went through developmental stages he never experienced before and continues to do so — like he’s catching up with his age… The hardest part about it was [leaving] the last session because you see all this progress and you don’t want it to go away.” — Mother of subject 010

“It was only 10 sessions and we have seen a lot of improvement.” — Mother of subject 013

• Six of the eight children in the study showed improvement in their GMFM score.

• Three showed greater improvement after the MSI therapy than after play sessions.

• One showed improvement after MSI and continued to improve after play sessions.

• One shows apparent deterioration. This child has visual impairment and cognitive disability; she could not comprehend language adequately to follow instructions.

• Only one child showed clearly recognizable improvements on OGS. Scores on the ICF interview were highly variable.

• Parents reported many observed changes in their children beyond those that were reflected in outcome measures.